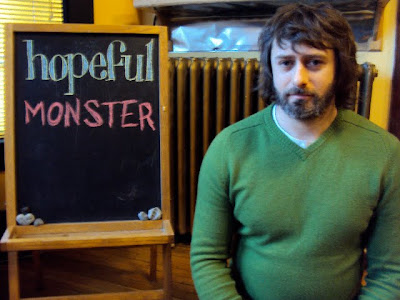 I met Namebacon at The Shed in Leicester, UK, when I played there in November 2008. He was the only person at the show who bought both Hopeful Monster CDs, and I guess he liked them cuz last month he emailed me about doing an interview for Justwannarock.net, the webzine he writes for. Namebacon is his nom de plume of course, his true identity to be kept secret because he works for the government — but this unassuming young bureaucrat leads a shadowy double life, infiltrating indie music cells, exposing their fiendish schemes and the conspirators who would keep them silent. Read his full report here.

* May 7, 2010* It seems justwannarock.net is out of commission at the moment. Luckily I still have a copy of the interview, so here it is:

1. Hopeful Monster, where did the name come from?

It's a science term. The evolution of species is driven by random mutations, little changes from generation to generation that cause feathers to grow on pterodactyls, horns to fall off unicorns, fish to grow legs and crawl up onto the beach, etc, gradually over thousands of years. Some mutations result in traits that give the new generation a survival advantage and these become dominant in the species over time. If the mutation is an extreme one, the offspring is so unlike its parents that it has to be considered a new species, like if any of the examples above were to happen in a single generation. They call it "macroevolution" and the lucky new critter is called a "hopeful monster." ...Or unlucky, I guess, if the mutation turns out to be a handicap and the monster in question dies a miserable and lonely death without procreating (it remains to be seen which version of the metaphor applies more directly to my musical career).

2. How long have you had the band going, and was it just solo or band act to begin with?

Actually it was a recording project first. My friend and I started a recording studio in 2001 called "Nervous System" in rural Nova Scotia (Eastern Canada). We each had a batch of songs we wanted to produce and when my album was done I needed a name for it. So first Hopeful Monster was the album title, then I put a band together to perform the songs and called that Hopeful Monster. I love playing with a band, especially for the kind of music I was writing in those days, but it's so expensive to tour with a band that now I mostly do solo gigs or very small ensembles...until word gets out and I can afford to bring the gang!

3. Where/who/what influences you? Any one artist in particular "taking your fancy" at the minute?

Sooo many artists have influenced me over the years, everything from Beatles, Beach Boys, Zombies, Kinks and Todd Rudgren to AC DC, Alice Cooper, Linda Ronstadt, Gram Parsons, Dylan, Cohen, Spiritualized, Sparklehorse... I could go on forever. I grew up on the 60s & 70s LPs my dad had, got into fluffy hair metal when I was a teenager, punk when I was in high school, grunge when it happened and so on. But I've always tried to combine classic and experimental songwriting with arrangements that have a sense of adventure. I'm really into Of Montreal and Sufjan Stevens, but they're not exactly breaking news...I usually latch on to really good stuff about a year or two after the mainstream has flirted with it and moved on. Then I never let go. I played with a couple UK acts last time I was there that are fantastic — Sweet Baboo and The Junipers (from Leicester no less!).

4. Touring, where's your favourite place to tour, any stand-out gig or venue you remember?

UK is pretty great — the cities are close together, the roads are awesome, the countryside is lovely and people have good taste and a great sense of humour. Canada has good roads but the country is huge (beautiful too!) and cities are really far apart. Mainland Europe has it hands down though — you get paid well, audiences listen quietly and buy lots of CDs. I think maybe its because they are hungry for English language entertainment. I love going places where people speak a different language myself, so I suppose I can relate. Norway and Germany were especially awesome for me.

I played at Catweazle Club in Oxford, an open mic where tons of people turn up every week to see about 10 acts do about 2 songs each. Just a stool and a spotlight and everyone is totally silent (they have to be, there's no PA). An inspiring event that's been going on for about 15 years.

Prosciutto, pear, brie and arugula on ciabatta with mango chutney (today....yesterday it was egg mcmuffin).

6. I remember when I saw you play in Leicester, you did a song about Barack Obama. A year on, how do you feel about him as US president?

Oh yeah, the song is called "Landslide" and I actually wrote it before I ever heard of Obama. I tried to sell it to him for his election campaign because it seemed like he would win big and the song is kind of a social critique along the same lines as the Democrat agenda. Maybe it's a bit too critical to get votes though, he didn't use it. I like him. I'm still waiting for that health care announcement!

7. I personally like having an album in my hand as a cd or record, but with mp3 downloads selling at a record high, do you see it as a good or bad thing for bands like yours?

For an act like mine its huge because I can sell my music anywhere in the world without a distributor. It just wouldn't be possible otherwise. CD Baby is good for mail ordering CDs worldwide, but I'm probably selling more digitally though. It also helps me figure out where to tour. Good for the environment too. I like the idea of putting the music and lots of artwork up online, but also selling CDs in special packaging at shows. That's what I did with Metatasking... the CD you have is from a limited edition of 100 hand painted, hand stamped copies.

Are you a CD or vinyl kinda guy?

Love vinyl but my turntable has been broken for years. CDs are pretty convenient...

8. You may be aware of the recent foot of snow that bought Britain to a complete and utter, EMBARRASSING stand still. Hailing from Canada, how do you fair in the winter months.... and did you laugh at us?

I wasn't aware, actually. My brother lives in London and my wife works at a newspaper but I live under a rock. You can feel free to laugh at me...

Right now I'm working on demos for the next album. I have to finish writing songs & brainstorming parts, then I'll workshop the arrangements with musicians (including strings, horns, other orchestral instrumentalists, rhythm section etc) for a studio recording and a big band concert / live taping. In the meantime I'll be doing solo or small ensemble shows — sometimes I play with just the string section or just the guitarist etc. I did a residency at The Local Pub in Toronto last year where I introduced a new section every week and brought them all together as a 7 piece for the final show. There are videos from that series on my blog, and videos from that UK tour too (not the Leicester show unfortunately. I did tape the Junipers' set when we played together in Northampton, some of that is posted too: http://hopefulmonstermusic.blogspot.com — click "videos" on the right hand side of the page).

10. Finally, bear vs lion, who would you put your money on?

Bear for sure. But imagine a yellow bear with awesome hair like a lion's — there's a hopeful monster for ya. Just don't ask him who is daddy is...